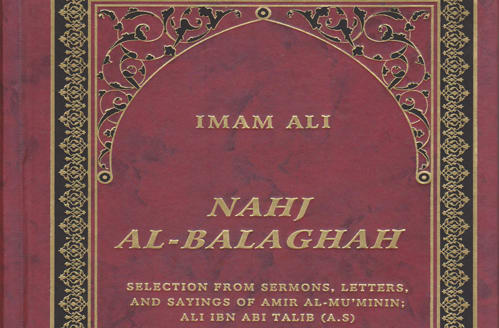 “Nahj al-Balaghah” is a selection of letters, sermons, and speeches of Imam Ali (AS) that Sayyed Razi collected in the late fourth century AH. Due to its content and rhetoric, this book has been named “Brother of the Quran”. Some Arab commentators have praised the eloquence and rhetoric of Nahj al-Balaghah. This book is divided into three parts: Sermons, Letters, and Acronyms. In many sermons, the Imam has invited the people to carry out divine commands and abstain from taboos (prohibitions), and in a part of his letters to the governors, he has instructed them to respect the rights of the people in a precise manner.

At the time of his death, the Prophet of Islam left two precious trusts to the world, which are the Quran and the His Ahl-al-Bayt. Among the Ahl-al-Bayt of the Prophet, Amir al-Mu’minin Ali (A) has a special position. The verse of the Quran introduces him as the soul of the Prophet Muhammad (S) and his virtues are such that no one can count them.

Due to the status of Imam Ali (A) and the attractiveness of his words, his companions from the first century AH (After Hijra) have memorized the sermons and words of the Imam and narrated them heart to heart. In the meantime, some people wrote them to preserve these precious treasures and left them in the form of books and pamphlets for future generations. Among about one hundred and twenty books before Nahj al-Balaghah, they have dedicated all or part of their volume to quoting the words of Imam Ai (A). The first person to compile the words of that Imam in a book collected by his companions was Zayd ibn Wahb (96 AH) in a book called “The sermon of the Commander of the Faith (A)”. After him, we see great people such as Nasr ibn Mazahm al-Munqari (202 AH), Ismail ibn Mehran (200 AH), Waqidi (207 AH), and Masada ibn Sadaqah, each of whom has left a memorial work.

Nahj al-Balaghah is a book containing sermons, letters, and short wise sentences of Imam Ali (A), which according to some is the most important source of knowledge of Islam and religious values after the Holy Quran and Prophetic Hadiths. In the late fourth century AH Sayyed Razi, one of the great Shia scholars collected this collection. He cited the request of his friends to compile a collection of eloquent speeches of Amir al-Mu’minin Ali (A) as his most important motivation for writing this book. The criterion for selecting the words of Imam Ali (A) in this book is eloquence and rhetoric. For this reason, the book Nahj al-Balaghah means “the obvious way of rhetoric”.  Some have stated that the sources of Sayyed Razi were very rich and extensive in collecting the words of Imam Ali (A); Because he used the two great libraries of Baghdad to compile this book. One of them was the 80,000-volume library of his brother Sayyed Murtaza, and the other was the 10,000-volume library of the House of Wisdom of Ibn Buyeh Deylami. Some have quoted that Sayyed Razi had compiled Nahj al-Balaghah in six volumes. Numerous statements have been made by scholars of the Arabic language about the literary value and rhetoric of Nahj al-Balaghah. Some have considered the eloquence and rhetoric in this book as one of the reasons for its survival. Ibn Abil-Hadid Mu’tazili (Sunni Scholar and the commentator of Nahj al-Balaghah) has stated below the description of the sermon of 108 Imam Ali (A), one line of Nahj al-Balaghah is equal to 1000 lines and even more than the words of Ibn Nabata (Famous preach of the fourth lunar century).