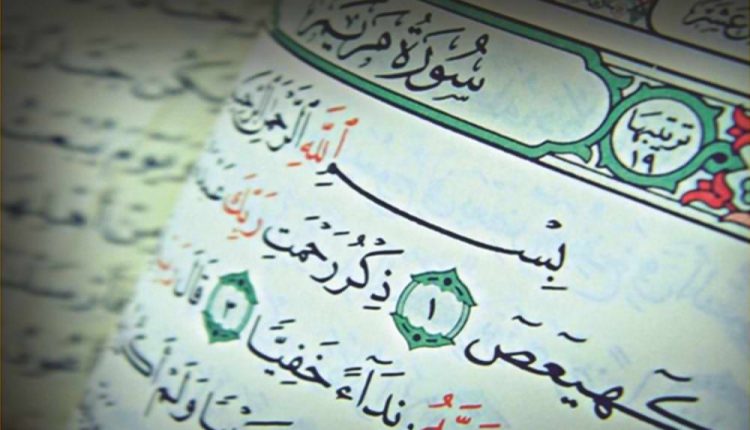 “KaafHaYa’aeenSaad. (1) A remembrance of the Mercy of your Lord to his worshiper Zachariah, (2) when he called upon his Lord in secret, (3) saying: ‘O my Lord, my bones are enfeebled, and my head glows silver with age. Yet, never Lord, have I been unblessed in prayer to You. (4) Indeed, I fear my kinsmen who will succeed me, for my wife is barren. Grant me a kinsman (Guardian-Wali) (5)

“In the name of God, the Merciful, the most Merciful” is the greatest spiritual key in this world.

Ibn Arabi said: “if someone does not obtain relief with “in the name of God, the Merciful, the most Merciful“, there is no hope for him. A hadith from Prophet Muhammad (S) says: ” In the ascension, I saw four rivers in the heaven: 1- river of milk 2- river of honey 3- river of water 4- river of wine. I asked angel Gabriel where the source of these river was, and he said, “I do not know. Ask God.” I prayed to God and an angel descended on me and ascended me. I reached a big dome made of pure pearl. There was a red ruby door that the streams came out beneath the dome. I entered with “In the name of God, the Merciful, the most Merciful”.  There were four pillars.  The stream of water flowed from “Mim” of “Bism” and the stream of milk flowed from “Ha” of “Allah” and the stream of wine from “Mim” of “Al-Rahman” and the stream of honey from “Mim” of “Al-Rahim“; God said: “I will answer the prayers from your nation to call me by this name”.

The whole Quran is the appearance of “in the name of God, the Merciful, the Most Merciful”
(بِسْمِ اللَّهِ الرَّحْمَٰنِ الرَّحِيمِ), and it has 19 letters, and Surah Maryam is the nineteenth Surah of the Quran.

These are separated letters which in Arabic are called “Huruf Muqata’ah”.

For example, a tradition says: “Saad” is a river in Paradise. Prophet Muhammad (S) said: “in the ascension, I reached the Saad River”.

Reaching and reciting of “Kaaf-Ha-Ya-‘Aeen-Saad” has the blessings and wonders. For example, 1- Prophet Zachariah had a child with his infertile wife in very old age. 2- Lady Mary (A) had a child without a husband.

It is narrated that “Kaaf-Ha-Ya-‘Aeen-Saad” are the letters of “the Great Names of God” and the Imam (A) combines them and performs miracles with God’s permission in the world. It is recommended by some mystics to call and recite ““Kaaf-Ha-Ya-‘aeen-Saad” “Ha-Mim-‘Aeen-Sin-Qaf” when you are in difficult situations to be relieved.

Mystic Ibn Arabi said: “These letters are the names of angels and are specific to 14 people, and each is the name of an angel. I met them and they gave me knowledge that I had not received from any angel who was my teacher”.

“A remembrance of the Mercy of your Lord to his worshiper Zachariah(2) when he called upon his Lord in secret,(3)”

“So, remember Me, I will remember you. Give thanks to Me and do not be ungrateful towards Me” (Al-Baqarah:152).

God remembers us and it is the result of our remembrance of God.

“Nida” in Arabic means “calling from a distance” and it is the opposite of whispering. The Quranic reason for this is:

“But to those who do not believe, there is a heaviness in their ears, to them it is blindness. They are those called from a distance“(Fussilat:44)

“We called out to him from the right side of the mountain, and drew him near in (Divine) conversation“(Maryam:52)

Zachariah called to his Lord, but a secret call because it was a voice in his heart. These are the states of the Prophets and Guardians of God. Once Mystic calls on God and says, “O Allah” (Meaning that calling him from a distance) But another time he witnesses God so close that he says “Allah” Without saying “O” at the start. Prophet Zakariah (A) was far in his intuition to the Almighty God.

Once you say “La ilaha illa Hu“, there is no god except Him.

Once you say “La ilaha illa Ant” there is no god except You.

Once you say “La ilaha illa Ana” there is no god except Me.

Once you say “La ilaha illa Allah“, there is no god except Allah. Allah is a comprehensive name of God, and these are belonging to the states of mystic intuitions.

Mystic Ibn Arabi, following this verse of “when he called upon his Lord in secret”, says, “Whisper with God in your heart, every day and always. Secret calling of God has many influences, try to be polite in this call”.

“Say: ‘My Lord cares little for you if it was not for your supplication, indeed you have belied so it will be fastened’” (Al-Furqan:77)

“Saying: ‘O my Lord, my bones are enfeebled, and my head glows silver with age. Yet, never Lord, have I been unblessed in prayer to You”. (4)

The first part: ‘O my Lord, my bones are enfeebled”. Bone weakness is a sign of aging. I have reached a point where my bones are hollow.

The second part: “my head glows silver with age”

The flame of aging has reached my head, my hair and face have turned gray.

The third part: ‘Yet, never Lord, have I been unblessed in prayer to You”

Here he says that I was not unblessed while praying. I mean, I prayed while I was not far from you.

In verse 48 of the same surah Maryam:

“I will call on my Lord. Perhaps I shall not be unblessed in calling my Lord“.

Meaning, I should not be unblessed and unholy in praying to my Lord

Hafiz says: It is your duty to pray, and that is enough, do not confine yourself to where He is hearing or not hearing.

A tradition says:” When a servant is caught and calls God at the time of being caught, the angels say your voice is unknown, where have you been before (God does not say, but the angels say because God is the Most Merciful).

Indeed, I fear my Mawali (relatives) who will succeed me, for my wife is barren. Grant me a successor    (Guardian-Wali) (5)

“Mawali” in Arabic means those around me, I am old, and I want a successor (Wali).

And in this verse, the point is that Prophet Zakaria asked God for a “Wali” to be an heir (successor/Wali). With that said, how is it possible Prophet Muhammad (S) did not want to leave a “Wali”(successor) for his nation after him.

May God curse the enemies of Ahl al-Bayt

Word 9: If someone thinks that there is a creature superior than a human in the whole universe, which one is that?